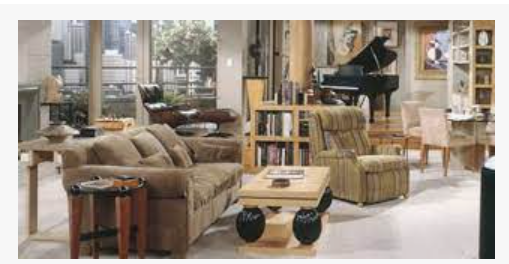 Running for 11 seasons the series Fraiser is one of the greatest and most successful USA comedies ever produced. It ran through the 1990s and was in constant competition with Friends for the most coveted awards. The show features the character of Doctor Fraiser Crane, a psychiatrist, who0 was first introduced as a fringe, then long-running character in the equally successful Cheers. He moves to Seattle to escape his failed marriage and to reconnect with his father and brother. He is close and akin to his brother Niles but his Dad, a cop, forced to retire after being wounded, is a very different story. 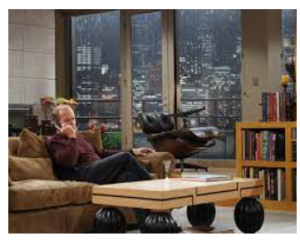 Frasier is a man of good taste and refinement. His apartment in a trendy part of Seattle is beautifully appointed and furnished. It has a large collection of African art, a grand piano and perfect furniture. An Eames chair is there, and some delightful Lloyd Loom Chairs are out on his balcony. This is all broken up completely when Martin brings his grey/green and duct-taped chair into the apartment when moves in. 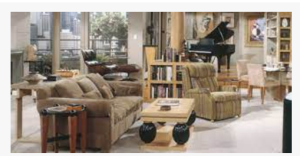 Frasier helps and hinders his own, and others, love lives. Niles is enamoured by Daphne, his fathers’ Mancunian care worker and physiotherapist. His Dad finally falls for the boy’s childhood babysitter, and she for him.  Whilst love avoids poor Frasier, either by bad luck or his own mistakes it’s a great watch and is still as funny today as it was back then.