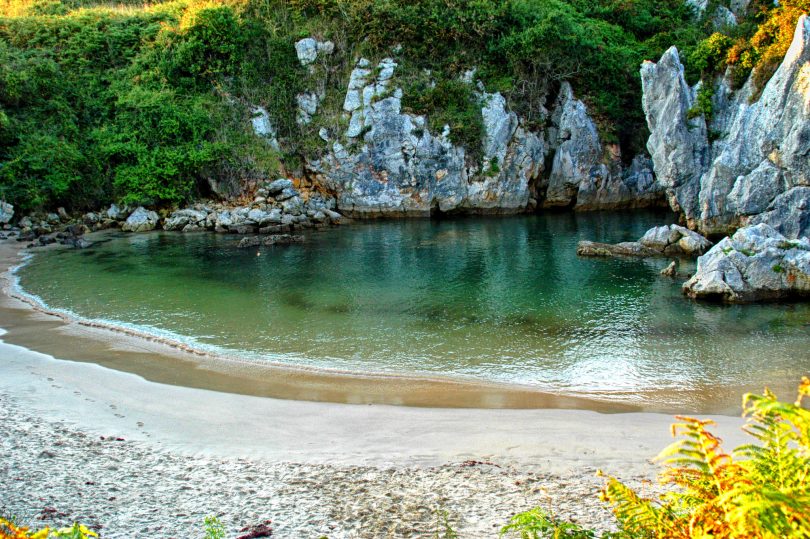 The Spanish geography houses impressive coastal treasures to delight the five senses. Today we rescue the rarest beaches in Spain and that are definitely worth visiting.

Although we still do not know if due to the pandemic we will be able to enjoy the long days on the beach in our favorite sandy area, today we want to honor some of the most peculiar beaches in Spain. Taking a dip, eating a snack or reading in the sun are some of the pleasures of summer.

If you want to discover new territories, surprise yourself with unique landscapes or dive in the most beautiful corners of the Spanish geography, we review which the rarest and most surprising beaches in Spain are.

Gulpiyuri beach, located on the Asturian coast, between Llanes and Ribadesella, is one of the smallest in the world, having a length of 50 meters. It is interior in nature; it has been declared a Natural Monument and has been produced due to the effect of erosion. You can only access on foot.

Las Catedrales beach in the Lugo town of Ribadeo is one of the most emblematic spots on the Cantabrian coast. Nicknamed for the similarity of its rocks with the flying buttresses of the Gothic cathedrals, the sandbank shows spectacular arches, the result of maritime erosion, up to 30 meters high.

Cala Macarelleta looks like a sea pool in the middle of paradise. It is a secret corner located on the Balearic island of Menorca. Its bluish waters and its minuscule size stand out, barely 20 by 40 meters. It is located in the Natural Area of Special Interest on the South Coast of Ciutadella.

The wild beach of Sakoneta is located between the towns of Zumaia and Deba and has a nudist character. It has a complicated access -access on foot after twenty minutes of walking- and in it you can see the geological phenomenon of flysch, especially at low tide. The beauty of its landscape stands out and in the proximity, in the heart of its historic center, the presence of the Church of Santa María de Deba, National Monument and jewel of the Basque Gothic.

It is a magical and unique place in Ibiza, especially due to its association with hippie culture and the numerous human sculptures sculpted in its natural environment. The authentic name of the place is Sa Pedrera de Cala d’Hort, in reference to the old use as a quarry of the place. The dreamlike landscape is full of rock-carved fish, Buddhas, Hindu figures, and calls for peace.

The Green Lake or Charco de Los Clicos is a singularity for lovers of excursions or photography. This phenomenon owes its origin to the outcrop of sea water on the surface, given the topographic uniqueness of the terrain. It is a lagoon connected to the sea by underground cracks and separated from the sea by a sandy beach. Its characteristic green hue is due to the presence of a large number of suspended plant organisms.

In fact, the place name alludes to the clicos, name of the abundant edible shellfish but extinguished by two turtles. Of course, you should know that bathing is prohibited, because the beach is located in the vicinity of the Natural Park of Los Volcanes.