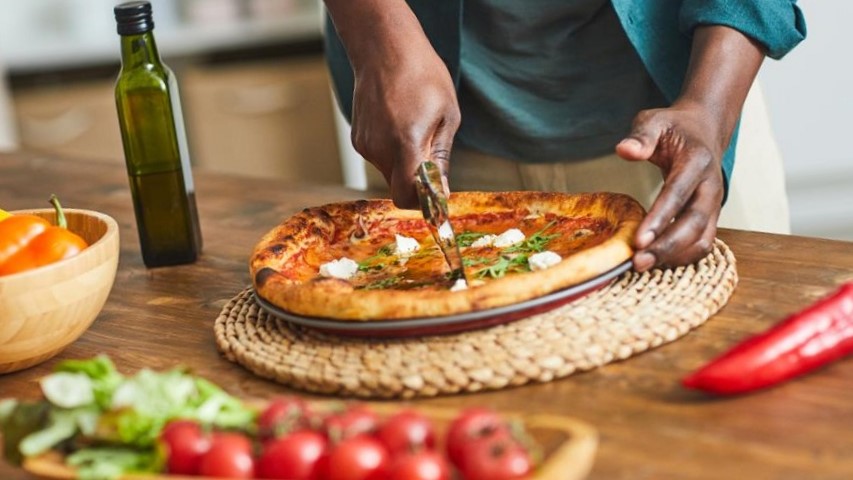 It was necessary to resort to Game Theory to determine which method allows us to divide food into three portions without leaving anyone dissatisfied. It has happened to all of us at some time. The weekend arrives and we can finally relax with our partner. We dim the lights, uncork a good bottle of wine, put on a Barry White record to set the mood, and finally pick up the phone to order a pizza from our trusted franchisee. When it is already on the way, suddenly, our (brother-in-law, father-in-law, neighbor, friend, relative, co-worker; choose whoever you want) forces us to share everything.

What is clean-cut pizza?

Clean cut pizza means the science and techniques of cutting pizza. Square cut, normal cut, and No cut are under the process.  When the order finally arrives and we open the lid, we will face a dilemma: how the hell do we break that into three pieces and everyone is happy? The most normal thing, what has been done all our life, is to trust our eye and try to cut three more or less equal parts to the good of God. The result is usually the same: one of the portions is excessively large while the remaining two are very small. It is not the best time for the guest to feel that the one who has cut and chosen first has won.

The study refers to cakes, although it can be applied to any food that can be split without being destroyed in the process. Is there a way to avoid this situation? Yes, as pointed out in a ‘ paper ‘ called ‘A Discrete and Bounded Envy-Free Cake Cutting Protocol for Any Numer of Agents’ by Haris Aziz and Simon Mackenzie in ‘Data Structures and Algorithms’, only in a somewhat complicated way. Two not too important details.

How does it work?

Let’s imagine that we have María and Juan, who were the ones who were going to taste a delicious pizza, and Marcos, who showed up without warning. The first movement corresponds to Maria, who has to cut the pizza as she sees fit, always starting from the fact that she is going to try to cut pieces of a similar size because she has to be satisfied with any of the three (which is why she cuts it). It is Juan’s turn, who now has to choose the two that he likes the most among those three pieces. And, of those two, the one he thinks is the greatest. Now what you need to do is cut a chunk out of that portion until it is a chunk the same as your second preference so that they both appear equally large to you.

Either choose one of the two pieces that have not yet been cut or select the one that has just been mutilated by Juan. It is understood that the rest of the pizza is discarded for now. So you can choose the one you want, so you will be satisfied: you have been the first to select. It is Juan’s turn again, who has two possibilities: either to choose that piece that seemed the best to him at the time, and to which he cut a piece, or his second preference, which, as we have seen, is the same as the first.

Either way, he will be satisfied because he had previously chosen that he wanted one of the two. What about Maria? That she is going to keep the piece that remains and is going to be happy with it because she has cut it herself. In no case will he keep the “mutilated” piece since Juan or Marcos will have chosen it before. Knowing this method forces the one who performs the division in the first place to do it in three equal parts, since if not, they will end up with the smallest.

The strategy devised by Aziz and Mackenzie does allow everyone to be happy with the piece that corresponds to them. There is still another thing. What happens to that piece that Juan had cut to match the two pieces? It is time for Marcos to divide it into three pieces that he considers to be of equal size, and then for Juan to choose the piece he prefers, which will leave him satisfied since he was the first to choose (as had happened with Marcos in the first round).

Next, Maria chooses another piece, and she will also be happy. In her case, she has received an additional portion despite having cut from the beginning what they assumed were three equal portions. Marcos will keep the remaining piece, and he has to be happy with it because he was the one who cut it.

This method introduces an important variable

The incentives to behave in a certain way. The pieces do not have to be quantum equal (this would be a utopia). Still, the strategy devised by Aziz and Mackenzie does allow everyone to be happy with the piece that corresponds to them, always assuming that everyone wants the largest portion. His proposal is framed within computational science. After all, it is a kind of algorithm and game theory. The area of ​​applied mathematics in which the rest of the agents involved conditions the individual’s decisions. All characters are presented as examples.