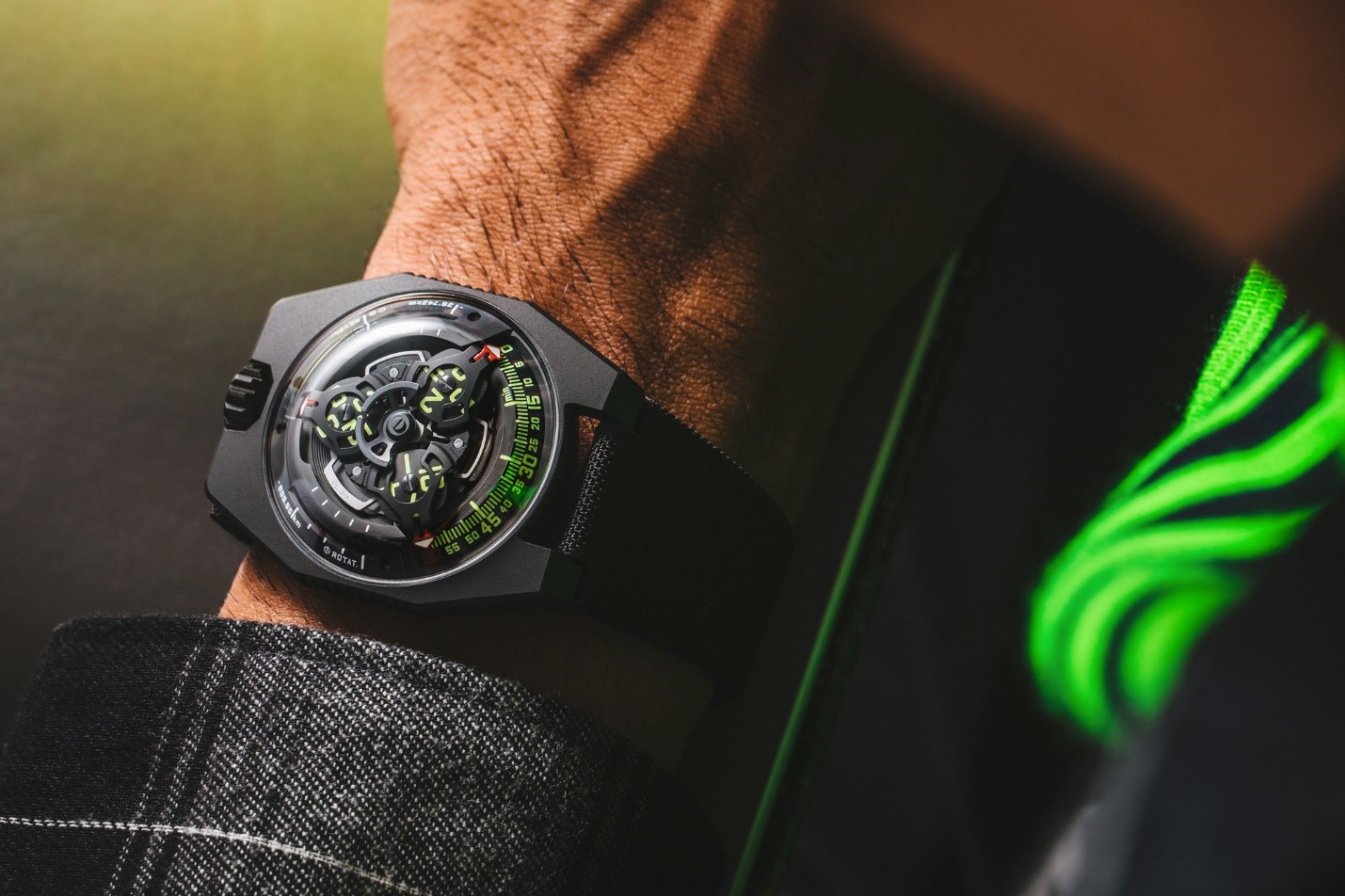 Urwerk is founded in 1997 by the watchmaker Felix Baumgartner and the artist Martin Frei. Urwerk is one of the most spectacular swiss luxury watches brands on the world watchmaking scene, resulting from a strong belief that the history of Haute Horlogerie is an art in constant flux. In just 20 years, his original approach to expressing the passage of time-based on a futuristic vision of watchmaking has shaken the most traditionalist minds and earned collectors and fans’ respect.

Developed in the early 1990s, its first creation was inspired by a clock built in the 17th century by the Campanus brothers. Every hour, a rotating disk rises and sets in an arc as if it were the sun. This concept gave way to its now iconic time indication using a floating satellite system, which is the basis of Urwerk watches, starting with the then-revolutionary UR-103 presented in 2003. All of them use a forceful and original aesthetic with futuristic lines. With Art Deco reminiscences, its satellite mechanism gives it a look more typical of science fiction.

One of the best examples of this is the UR-100, an impressive dimensional and technical timepiece launched on the occasion of the brand’s 20th anniversary.

When a little over a year ago, Urwerk launched the UR-100 Space-Time, one of its characteristics to take into account is that it was the most accessible watch made by Baumgartner and Frei. With its iconic satellite indication, the case of this new bronze version receives a finish that we have already seen in other of its creations. This particular texture is obtained using a network of oblique lines that form an upholstery of tiny pyramids of different sizes, the vertices of which are progressively cut to uniform the roof’s thickness. Without being the same, this design rescues the look of the UR-T8 Transformer or the UR-105 T-Rex, so named because its pattern looks similar to that of reptile scales.

The UR-100V T-Rex offers an octagonal case with moderate dimensions, not in absolute terms but for the usual heights in the brand: 41 mm wide, 49.70 mm high and a thickness of 14 mm. As we can see, they do not vary one iota for the rest of the collection’s usual values, even though its spectacular “dinosaur skin” may indicate otherwise.

The Urwerk UR 12.02 movement powers the carousel that transports the hours on three satellites that travel in succession along a 60-minute scale. Self-winding, it beats at 28,800 vibrations per hour (4Hz) and has a 48-hour power reserve. Its bi-directional perforated circular rotor regulates a profiled propeller, whose function is to minimize shocks to the rotor bearing and reduce wear.

It’s no secret that the people behind Urwerk are big fans of “Star Wars “for fans of the brand. Over the years, the Baumgartner and Frei firm has made several nods to that galaxy far, far away with names like Project C-3PO and Falcon Project. Still, for its latest release, Urwerk goes one step further and references this icon of the cinematographic world is even more evident. Inspired by the unmistakable image of the franchise’s white-armored Imperial henchmen, the Stormtroopers, the limited-edition Urwerk EMC TimeHunter Stormtrooper turns to white ceramic for one of its most technically advanced watches. It is the first time that an Urwerk wears a white look.

First of all, the Urwerk EMC Time Hunter is a basic indication watch. In addition to the hours and minutes on a large central subdial with a marked mega-tapisserie pattern, it implements a small disc-type second hand at 1 o’clock, graduated in five-second increments. It is complemented by a power reserve indicator at 7 o’clock that shows a maximum of 80 hours of autonomy. So far, nothing exceptional until we noticed a fourth subdial in the upper left corner and headed with the text “EM Control” printed on the screw-down bezel, with two unusual scales: precision and amplitude. We use these concepts when analyzing the specifications of a watch or its chronometry, but it is exceptional to read them on the dial.

After its debut with a carbon body, the new Urwerk UR-220 All Black shows all its power thanks to the black color of its DLC finish. Made of steel and titanium, its case is 25% heavier than the carbon version, an ergonomic advantage that is diluted by the prominence of a more uniform and traditional design that, subjectively, is more attractive than the particular resin band.

Almost nothing else changes to the UR-220 “Falcon Project” presented earlier this month. Its case continues to measure a resounding 43.8 mm wide by 53.6 mm high and 14.8 mm thick. Simultaneously, the rear implements one of the great innovations that the UR-220 provides: the oil change indicator, which shows the accumulated operating time of the watch mechanism.

The dial still displays Urwerk’s most iconic complication, the satellite time display. On the UR-220, the wandering hours are indicated by three rotating cubes that join with the retrograde minute structure as it enters the 60-minute scale at the 120º arc at the bottom of the dial. At the end of the hour, the minute pointer goes back to the beginning of the scale to be picked up by the next hour indicated on the incoming cube’s upper face.

Urwerk UR-T8, a Transformer to celebrate its 20th anniversary

Let’s place ourselves in the mid-1990s when young watchmaker Felix Baumgartner and graphic designer Martin Frei met by chance and discovered that they shared a fascination with time measurement. Such was their collaboration that they decided to found URWERK in 1997 to design and manufacture watches of the highest level, both technically and aesthetically, based on a futuristic vision of watchmaking. His first creations were the UR-101 and UR-102 presented in Basel that same year at the stand of the AHCI (Horological Academy of Independent Creators). However, it was the UR-103 presented six years later that put him Urwerkon the spot. Urwerk’s birth is now its 20th anniversary, and to celebrate it, the Geneva firm launched its first transformable watch: the URWERK UR-T8.

Leaving the pocket UR-1001 band behind, its titanium case is the largest ever made by Urwerk, and that, knowing its usual XXL measurements, already tells us where the shots go:  60.23 mm wide, 48, 35 mm in height and 20.02 mm in thickness, in a horizontal rectangular geometry that expands towards the back of the hand in the same way that the UR-110 already taught for the first time, showing the time on the right side of the watch, always within reach of our eyes although most of it is hidden under the sleeve. The large crown is located on the left carriage, right in the same place where all the turning and rotating operations of the case have their axis.

Its caliber UR 8.01 is an automatic winding mechanism whose single barrel provides a 50-hour power reserve. One of its features is the pneumatic control of the lift system. A rotating propeller connected to the rotor absorbs any sudden and violent movement without jeopardizing the rope’s efficiency, an innovative safety system that was born in 2008 within the UR-202. This propeller “breathes” thanks to the shield’s skeletonized area that covers it, visible when the sphere is hidden.