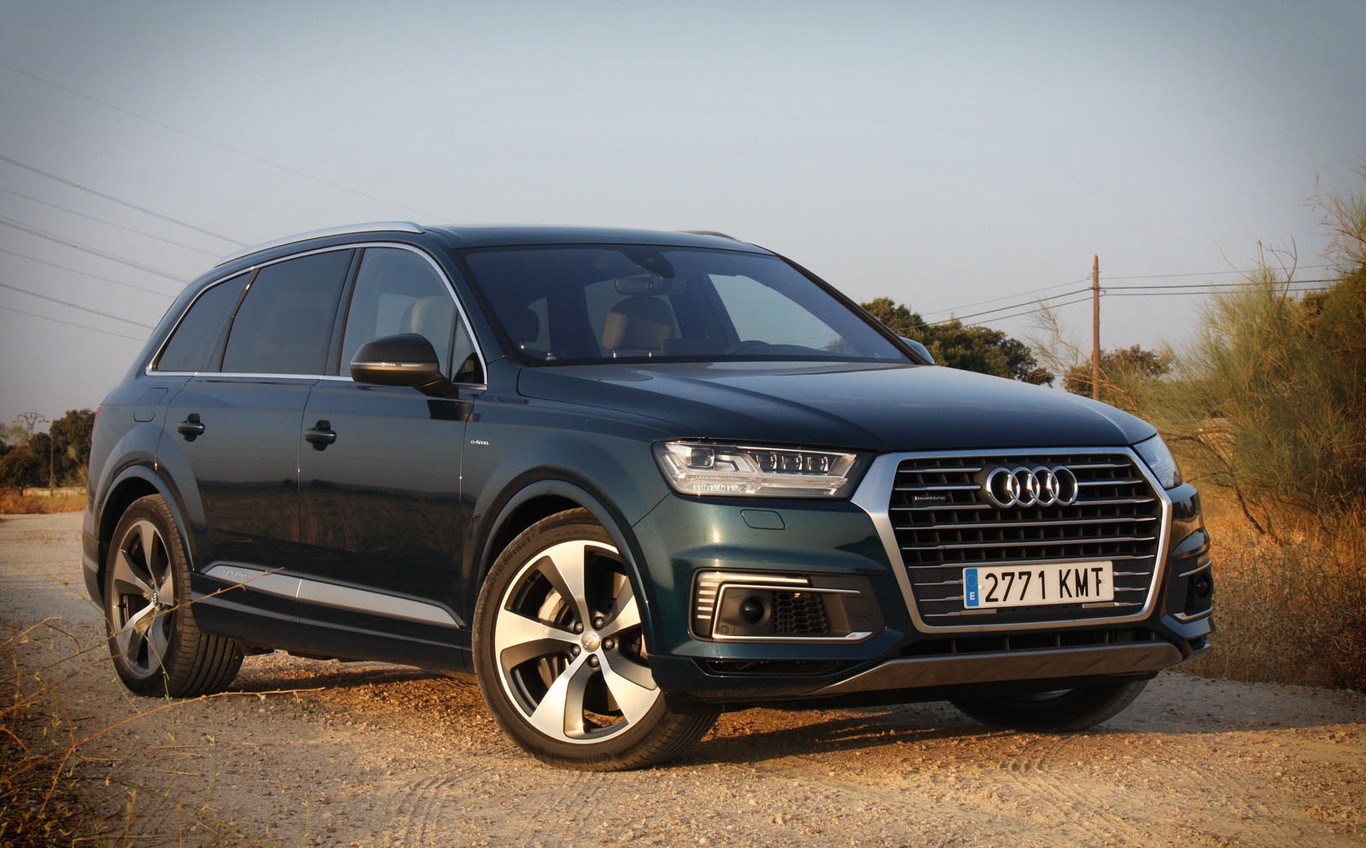 Perhaps an antidote to the fear of diesel has taken over the market by adding an electric motor to the car in question. That’s what the protagonist of our test offers today, the Audi Q7 e-tron 3.0 TDI that, with its 373 HP and its rechargeable battery system, proudly displays the ZERO label of the DGT that, among other things, exempts traffic restrictions despite having a diesel engine. How it behaves? We tell you

We already knew other proposals of the Audi Q7 e-tron, the big SUV that we tested in version 3.0 TDI ‘Ultra’ at the beginning of the year and that such a good taste of mouth left us then. But we did not know what it offered and how this plug-in hybrid version, unique in the market, combined with electric and diesel, behaved beyond a brief contact when it was introduced. 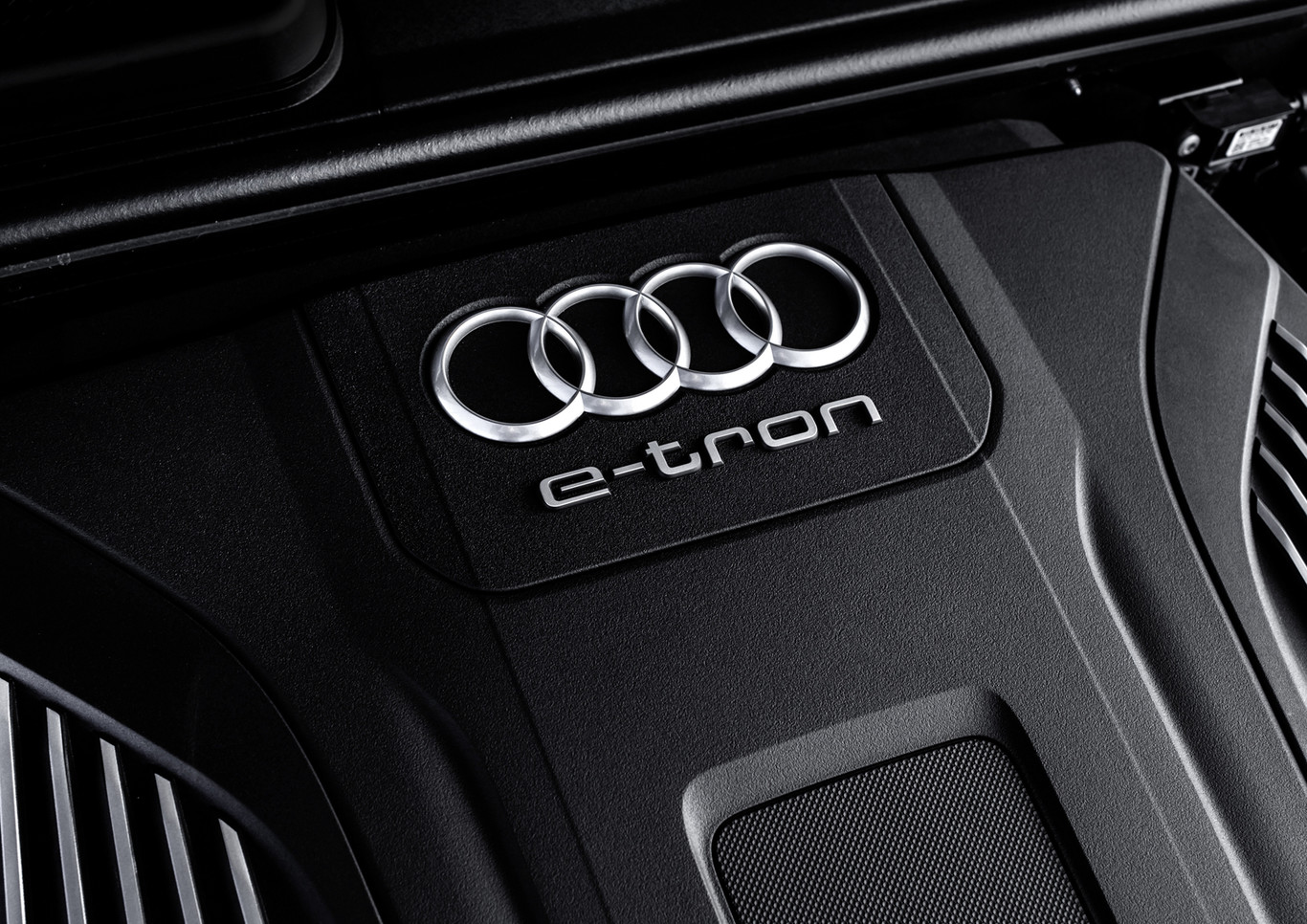 The aesthetic changes to be e-tron

At first glance, there are small details that allow you to identify the e-tron versus other versions. The highlights are the specific daytime lights, located in the lower part of the front bumper. Small LED lights that give a different look than other Q7.

For the rest, the most retailers will have noticed that this car has two “fuel” caps on the rear side wings, the one on the left to hide the cargo intake and the one on the right for the tank filling mouth of fuel, diesel.

All spiced up with the e-tron inscriptions on the front flaps, on the boot lid and little else. If we go inside, we must press the start button to make the fully digital control panel come alive and see the diagram that indicates the charge of the batteries and then, once running, will indicate at all times how it is managing energy.

In the dashboard there is a button that allows to choose between the three modes of energy management, the EV to use the car only the electric mode while it has a battery; the battery hold that limits the use of the electric motor to save the available load and the hybrid that is the most usual, which automatically manages the combination of the electric motor and the combustion one. 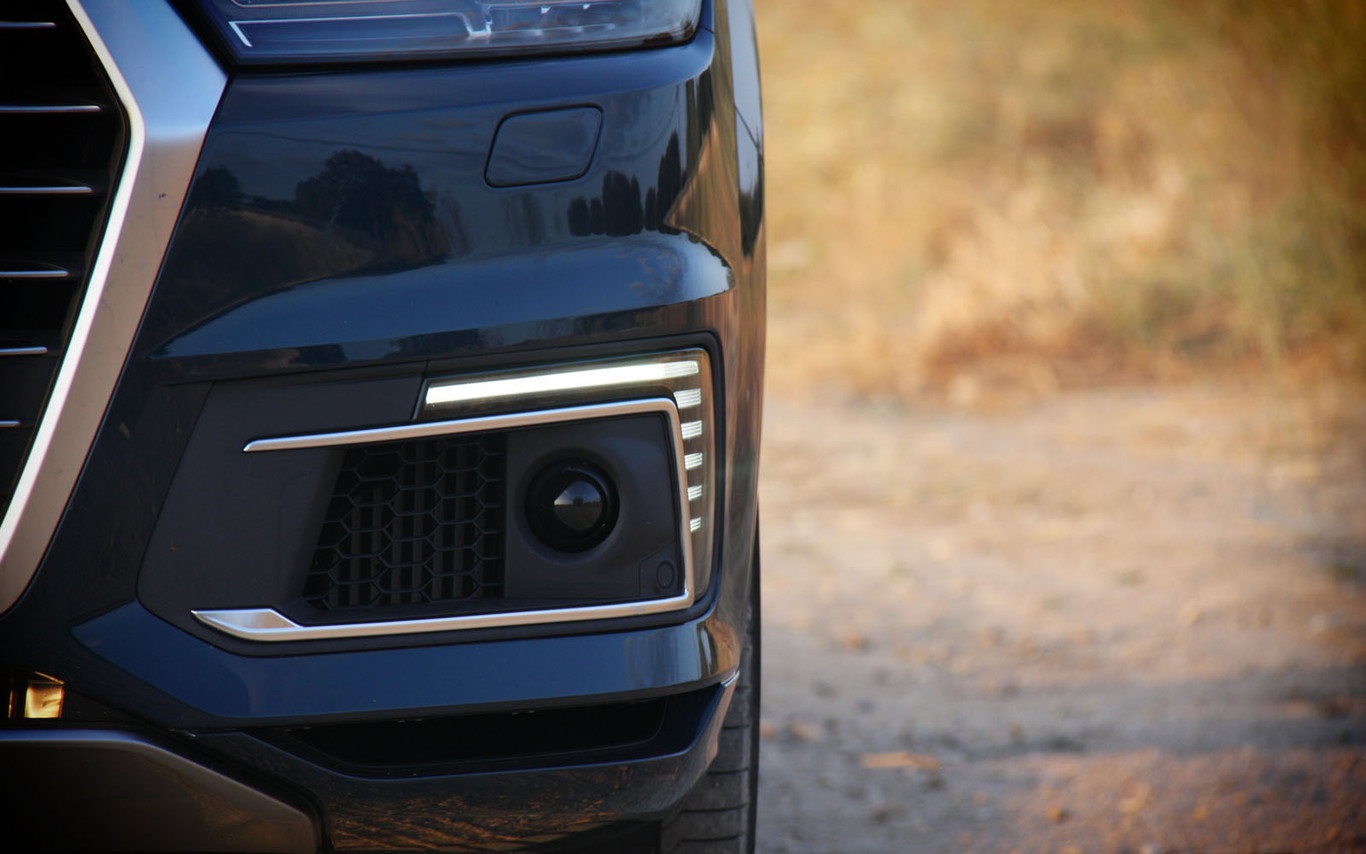 Batteries under the boot floor

Otherwise, the rest of the changes with respect to other Q7 are found in the back. Under the floor of the trunk is the gigantic lithium ion battery, which is composed of 168 prism cells grouped in 14 modules of 12 cells each, with its corresponding liquid cooling system to always maintain its optimal temperature.

These batteries are responsible for the Audi Q7 e-tron is not available in seven-seat configuration as the rest of the engines in the range, and also the trunk loses some capacity. It remains at 650 liters after having lost 240 liters compared to another Q7 of combustion. 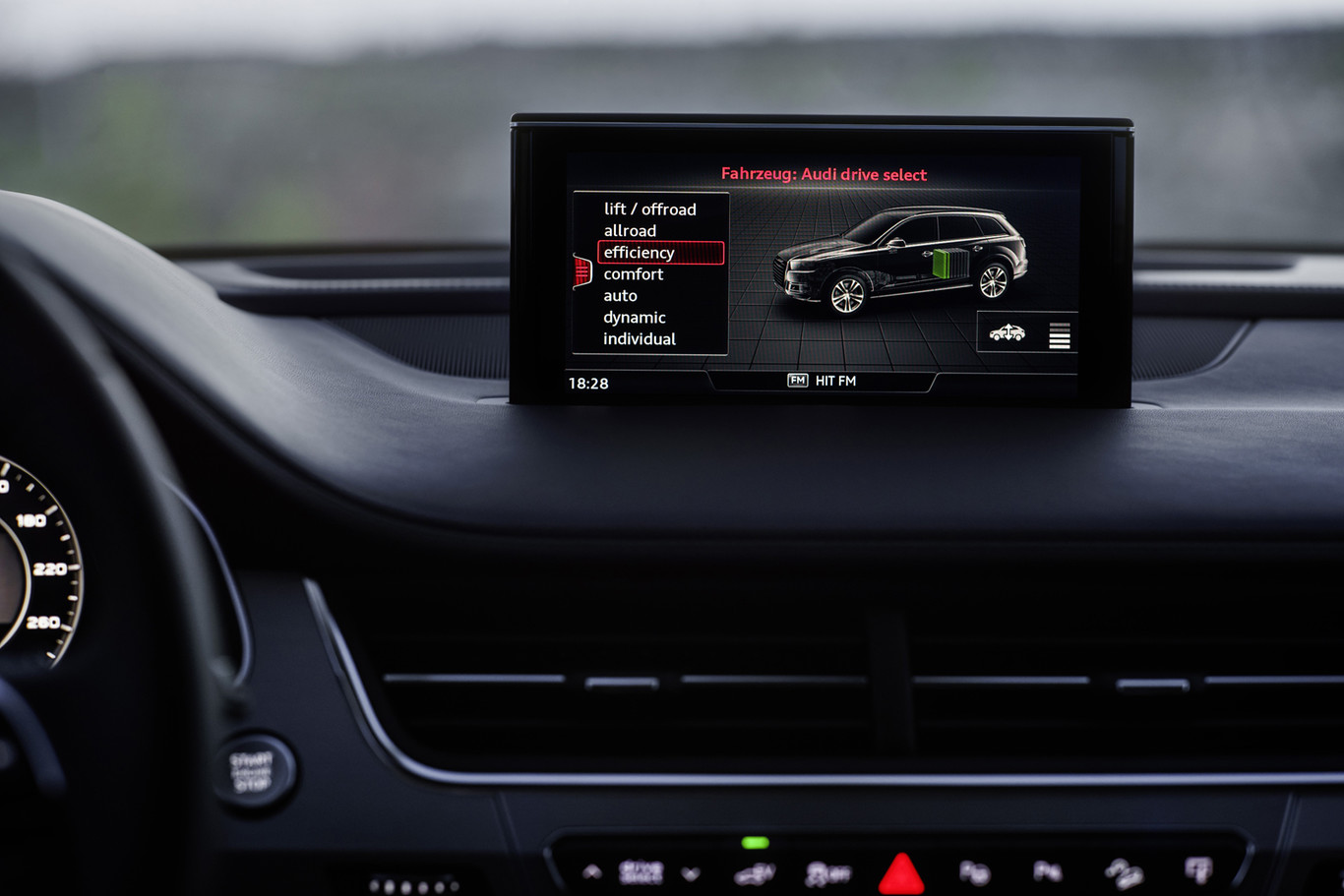 Being a hybrid, after pressing the start button you should pay special attention to the Audi Virtual Cockpit to know if the car has been started, as there is no mechanical noise to indicate it. If so, you can start the march, silence commands. If you had the car plugged in, the logical thing would be to have a theoretical 56 kilometers of autonomy, and as was the case, we started in electric mode.

The first thing that stands out, after a few minutes at the wheel and as it happens in other models of mastication dimensions as the Tesla Model X , is the strange feeling that is created when moving on the back of a car this big and make it such a level of silence and softness. And I say it positively, personally by city and in an SUV, I prefer to move around so listening to a combustion engine, either gasoline or diesel. 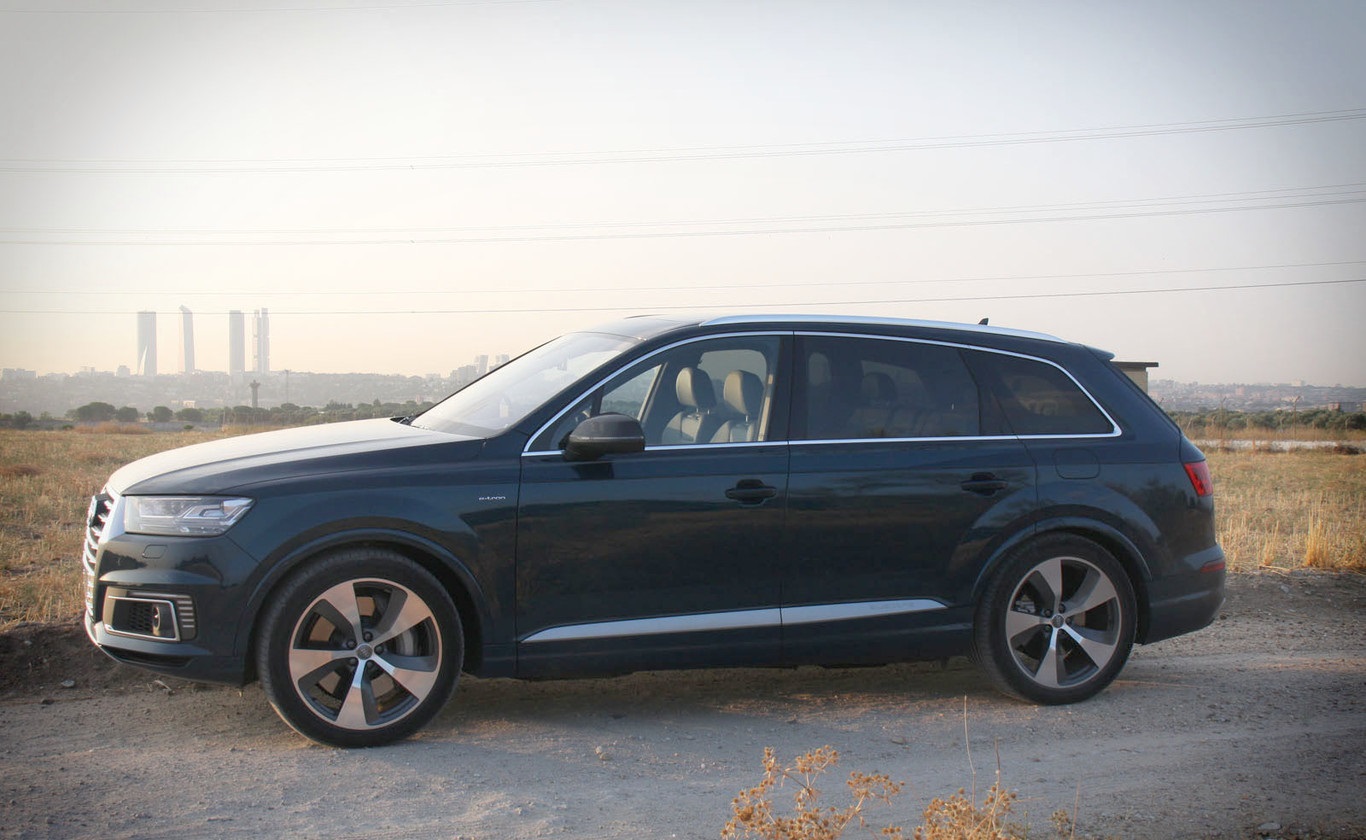 If there is a charge, this is how I want to move around the city

The car is perceived very sensitive to accelerator movements, and especially in the first few centimeters of travel. It transmits a lot of thrust thanks to the instantaneous torque of the 700 Nm electric motor. No Q7, not even the powerful SQ7 offers 0 – 30 km / h as fast as this one.

After playing a while in EV mode and moving only in electric, I decided to change the Hybrid mode before finishing with all the available battery in half of the declared kilometers. In this second configuration, the car automatically manages the energy sources, taking into account, among other things, data such as the orography of the terrain, which is advanced by about 3 minutes thanks to the data provided by the navigator. 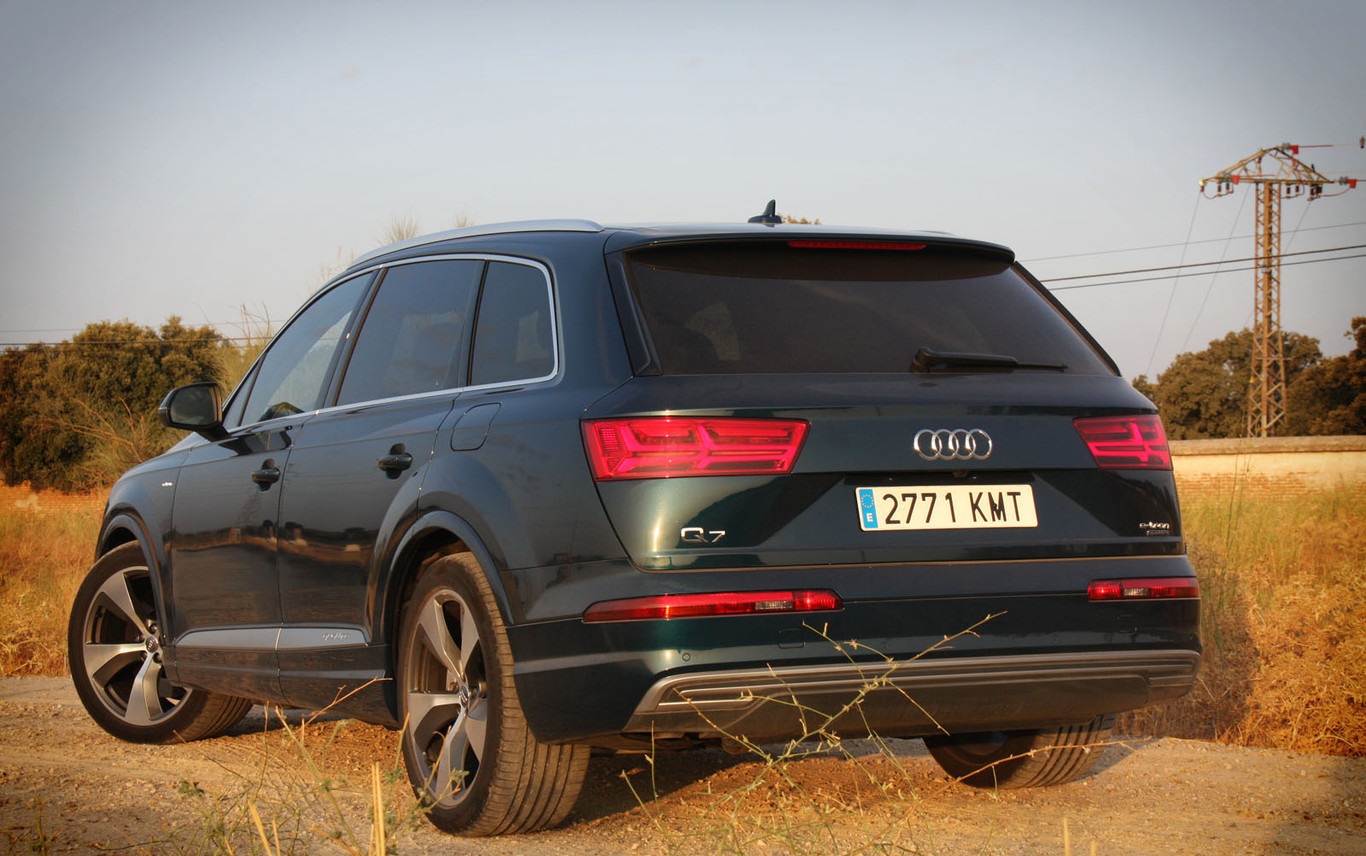 Smooth and pleasant to drive, this is how we could define the Audi Q7 e-tron when we carry out this type of driving, which on the other hand is the most usual for the driver type of an SUV of this size. The transition from electric to electric plus diesel, is softer than I expected, and I am particularly struck by the good soundproofing of the diesel. So much so that I came to doubt in the initial compasses that there really was a TDI and not a TFSI under the hood.

In this sense, the fact that normally the first meters after a stop are done in electric only mode and that the diesel engine starts when we already have an inertia, helps to camouflage the sound and results in a more pleasant feeling when driving. 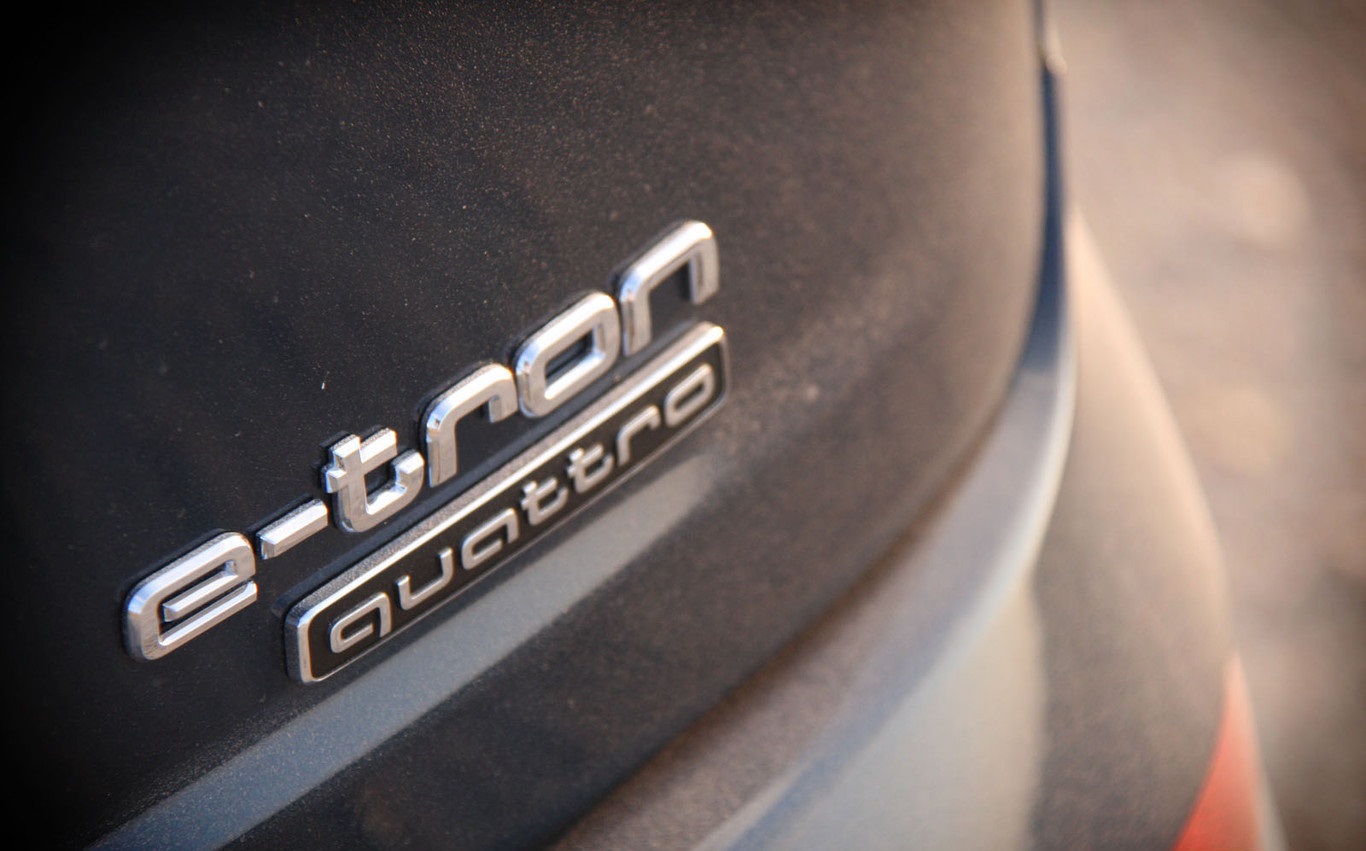 Another aspect that strikes me is the feel of the brake and accelerator pedals, completely different from those of a normal Q7. The accelerator has two sections clearly divided by a stop. The first section could be considered the electric motor, because if the car interprets that with the level of battery charge available and with the level of demand that we are doing can move only in electric, it will move in electrical.

On the other hand, if we step more deeply and “break” that stop, the combustion engine will be activated to ensure the necessary response. At first the feeling is strange when driving it, you have to get used to playing with a non-linear accelerator, but once you have caught the touch you can play between electric and gasoline with the right foot. 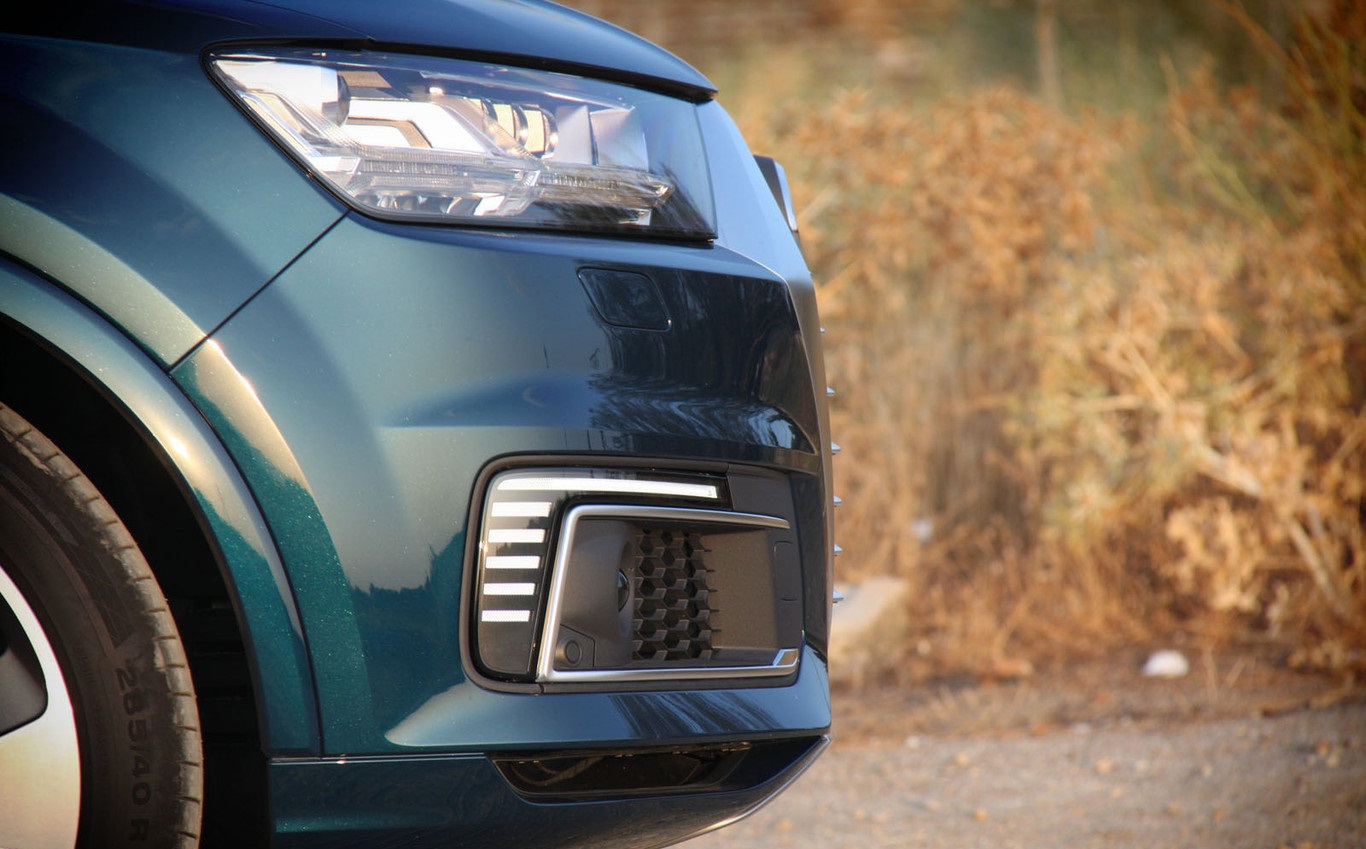 At no time do you feel the typical connection transmitted by a traditional brake system, in which it is easy to dose the braking intensity depending on the circumstances. Point against.

More logical than other hybrids when you go on the road

The Audi Q7 e-tron is unique in the market for the combination of diesel and electric, and in fact, by the type of use that is often given to these cars, everything seems to indicate that it would be the most logical option. 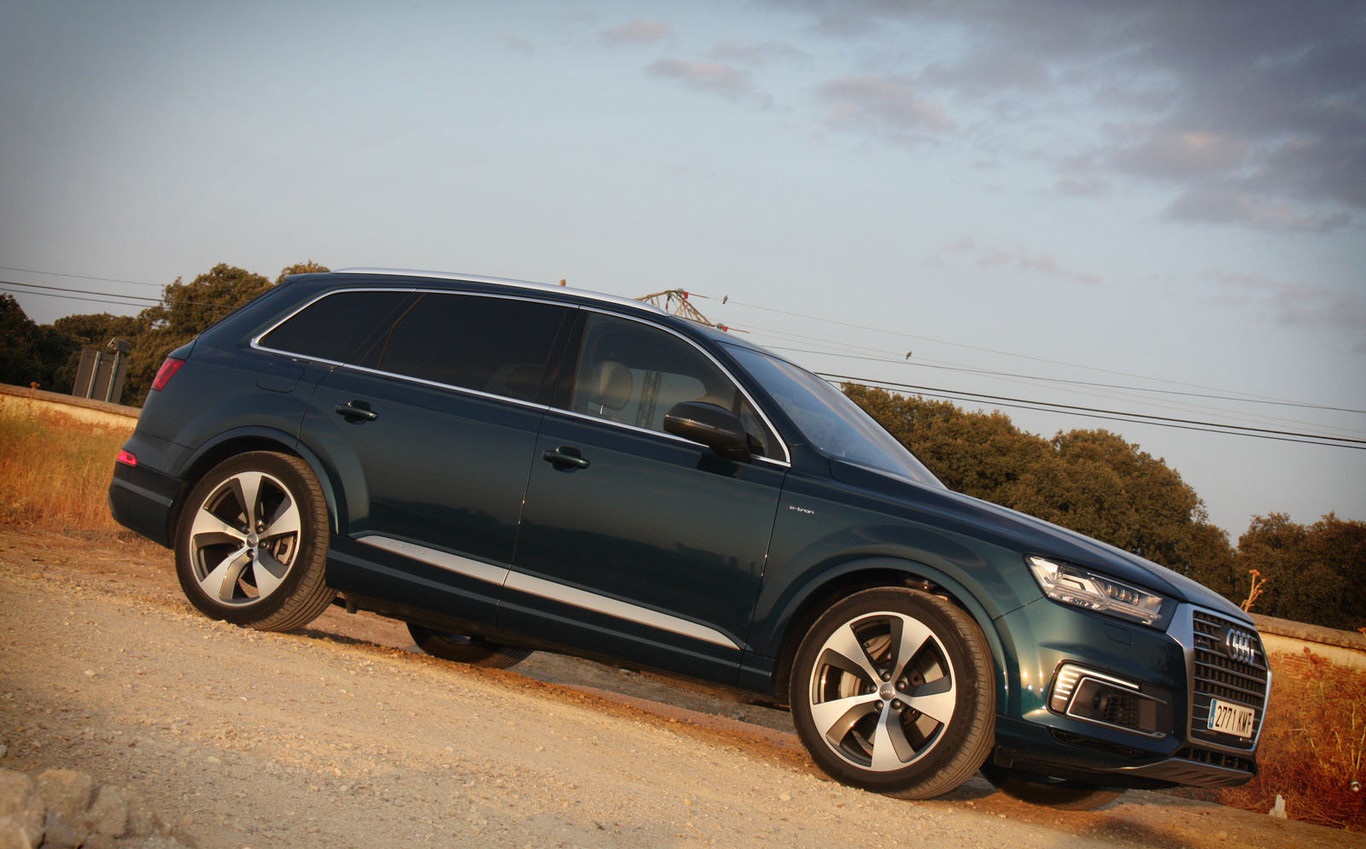 The large SUVs are usually cars for day to day travel by city, but they are also given another type of use, since they are cars destined for large family trips. It is there, in that type of displacement, where it does not make much sense that it is a gasoline engine that pulls the car once the electric autonomy has been completed, and more so if we take into account the overweight that the batteries represent.

On the road, the Audi Q7 e-tron offers excellent ride comfort. With a battle close to 3 meters long, its aplomb on the road is outstanding and the only difference with any other Q7, is a slight overweight and oscillation of the back, where the batteries are, which is imperceptible in the greater part of the occasions. 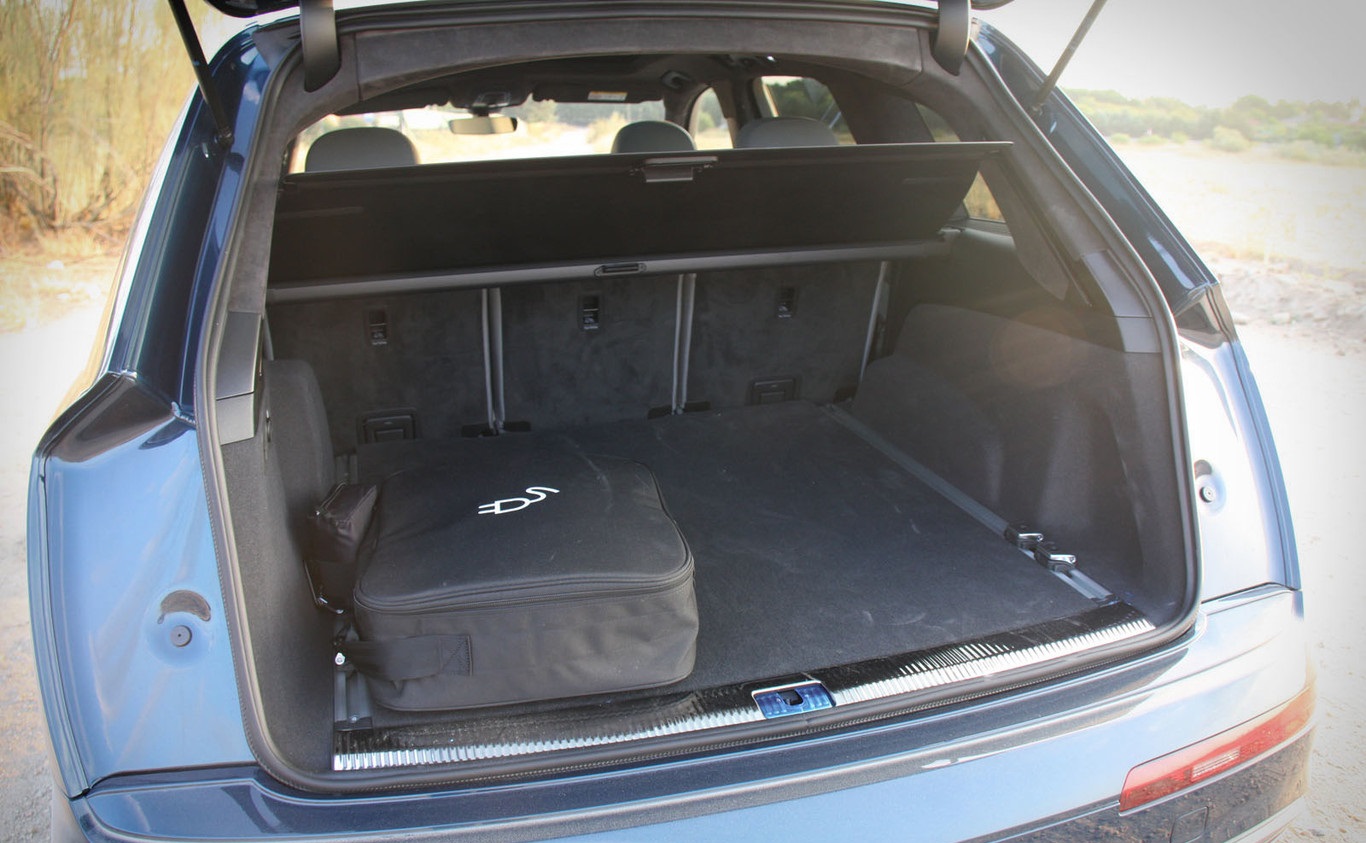 In addition to the loss of liters of luggage compartment compared to a normal Q7, in the e-tron it is also necessary to take into account that the cables to load it are stored in that suitcase that subtracts another few liters of capacity

Only if forces a little in curves, you will notice some drift from the rear and also in the projections or expansion joints you will notice that the car reacts a little different due to the more than 400 kilos of weight that weigh down the back of a car that loaded with 4 occupants and suitcases, will pass without problems of three tons of weight. 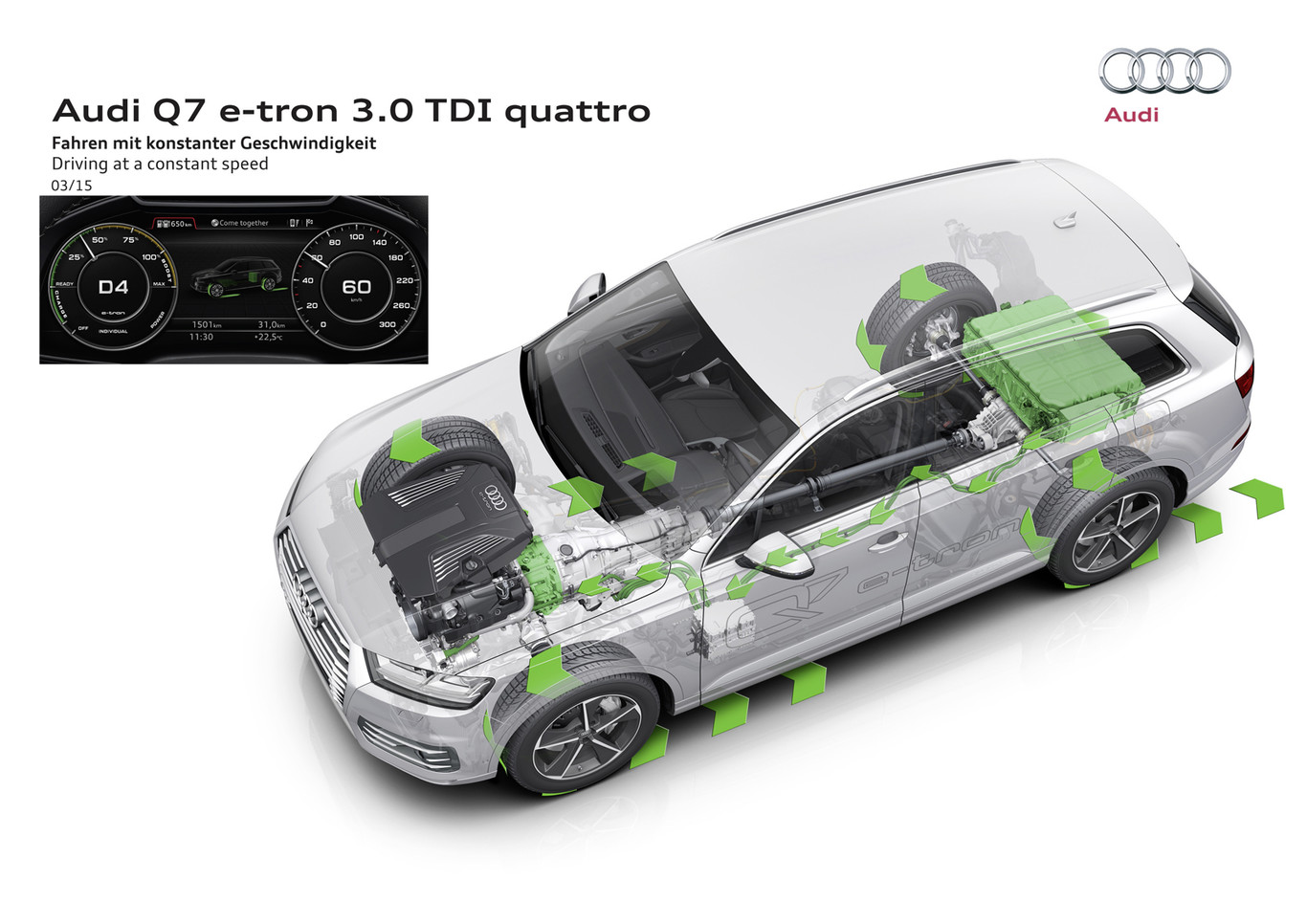 Logically, with a maximum autonomy in electric mode of 56 kilometers, most of the journeys on the road are made using only the diesel engine. This is a six-cylinder that delivers 258 hp (190 kW) of power and 600 Nm of torque, enough to carry a cheerful pace on the road.

It gets along very well with the 8-speed Triptronic gearbox, which allows you to use the longest developments to make kilometers, reducing consumption to a minimum. In this sense, and without having done with the more than 500 kilometers on the road, we achieved a consumption of 9.2 l / 100 km. 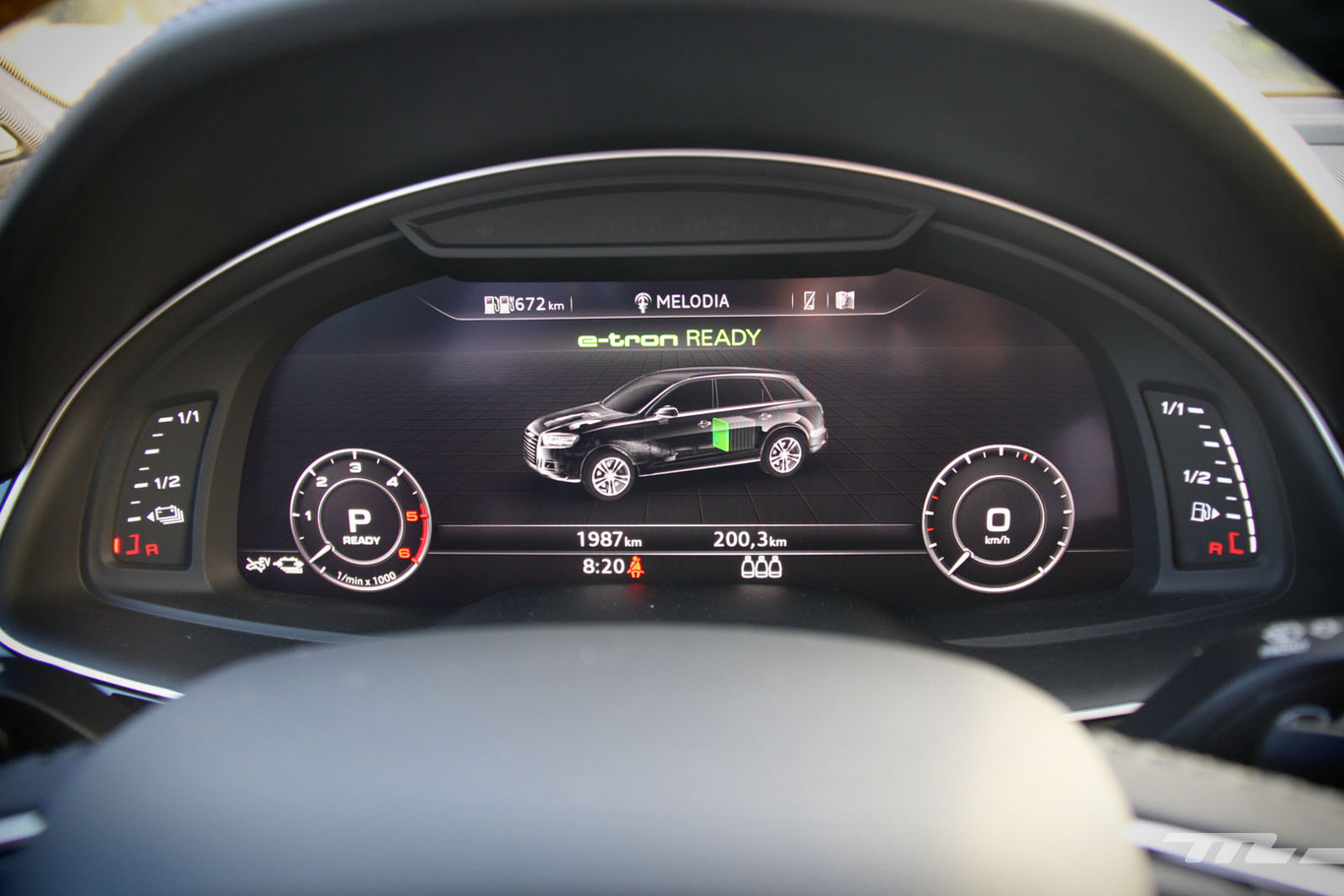 That is about a liter more every 100 kilometers than we did with the Audi Q7 e-tron 3.0 TDI ‘Ultra’ that we tested at the beginning of this year, with which it shares a motor but with a little more power in this case. By increasing power and weight, it does not seem unreasonable to assume a liter of consumption every 100 kilometers.