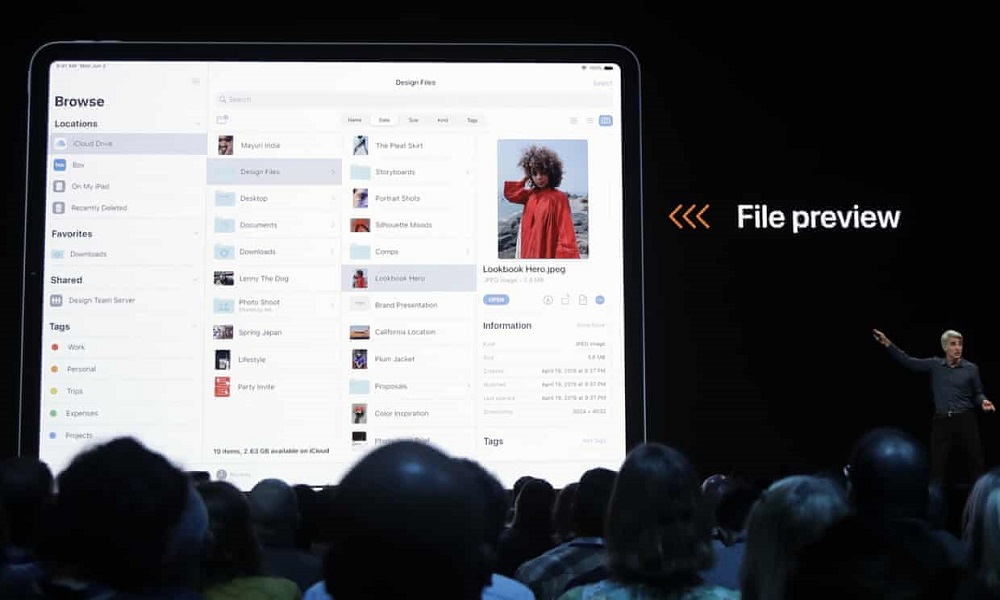 During this year’s annual WWDC 2019 Apple unveiled its latest iOS, but also made a surprising announcement of its new mobile operating system – iPadOS, a rebranded iOS to be used on iPads only. Even though new iOS 13 and iPadOS 13 are built on the same platform, iPadOS is enhanced and tweaked so that it can make better use of a large Multi-Touch display, offering new and distinguished features to iPad users.

Here are the most important new features of this OS coming this fall, that will make the iPad experience truly distinct.

The new Apple’s OS will make the iPad’s home screen more tablet oriented. This basically means that its grid of applications is tighter, so you can see more apps – 6 in one row, and there is more usable space on the display.
The option to show TodayView on the Home screen, alongside apps, will introduce quick access to frequently used widgets, similar to widgets on Android tablets. This change will now replace a lot of boring dead space on the display and make use of it.

With its newest OS, Apple is working on improving multitasking features. There are two features iPad users will find easy and intuitive to use:

The new iPadOS will now support a USB drive or an SD card reader, making it easier for users to access data stored on other devices, and easily manage them using the Files app. No third party apps will be needed, and no intermediary Mac to give support to the process.

In addition to this, it will be possible to directly connect a camera to the iPad, and import photos directly into editing apps, such as Lightroom.

While with iOS 12 browsing the Internet on the iPad was the same as on the iPhone, that is restricted to a mobile-view, Safari will now open websites in a modified web view, giving users the real web browsing experience, optimized for touch.

The users will benefit from this improvement, as they will now be able to use desktop versions of web applications, such as WordPress or GoogleDocs.

Also, a Download Manager will be included, so the files and media downloaded from the web can easily be accessed in the download folder.

iPad users will be happy to see the new improvements of the Apple Pencil, with the latency now decreased from 20ms to 9ms.

Swiping from the corner of the display with the Apple Pencil will open the Markup view, making it possible for users to put their notes to anything on the screen – webpages, screenshots, documents, and emails.

Apple has finally decided to take working on documents to the next level. This means that selecting, pasting, and copying text will be much simpler.

Users can now just tap on a word and swipe to where they want their selection to end, such as the end of the sentence, or the paragraph. The selection can be easily handled using three-finger gestures for copy, and paste, while there is also a three finger-gesture for undoing an action.

Also, new fonts can be downloaded and purchased from the AppStore, and they can be used in various apps.

With this new feature, users will be able to use their iPads as an extended display for their Mac desktop, as a second display, or to mirror its content. Also, when used together with the Apple Pencil, an iPad can be used as a drawing tablet, using a wired or wireless connection, within a 10-meter range,

Besides, you can seamlessly transfer your sketches to your Mac with a simple drag-and-drop feature.

New tablet-specific OS is believed to be much faster than iOS12. Apple claims that the FaceUnlock feature now works 30% faster while applications open twice as fast as on the previous OS. Also, the apps are smaller when it comes to their download size, which means that they take less storage space.

So, if your iPad is one of the tablets getting an update this fall, you will get quite a performance boost, as well as a lot of new features which will make it more possible to use your iPad as a laptop replacement.

Also, this might be the perfect time to convert your android app to ios.