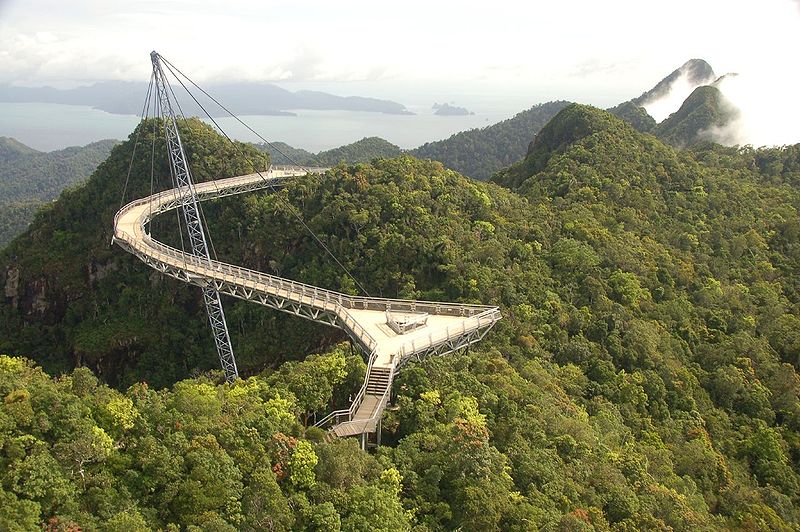 Bridges are a cause of panic for many people. There is even a specific word that designates terror towards them: gephrophobia.  This phobia is related to the obsessive idea that we can fall off the bridges, towards which an irrational fear is experienced. When faced with one, the person can manifest physiological responses of anxiety, such as dizziness, agitation, hyperventilation, rapid heart rate, and even panic attacks.

There is another related condition, acrophobia, a word that refers to an extreme fear of heights, another problem that people experience when driving or doing construction, maintenance or inspection work on bridges. Experts point out that both conditions affect a significant segment of the population.

Do you want to know what the most terrifying bridges in the world are like and where? Come on a virtual trip.

Beyond having a name straight out of a horror movie, the Deception Pass Bridge can be pretty scary to drive on a foggy day when visibility levels are nearly nil.

This two-lane structure connects Whidbey Island and Fidalgo at Deception Pass State Park in Washington State. If driving on the Puget Sound’s water isn’t scary enough, walking the narrow footpath on the edge of the bridge has its own too.

Anyone who fears heights should avoid passing through this corner of China’s Hubei province. It is a suspension bridge for vehicular traffic. It is 1,222 meters long and crosses the Sidu River Valley near Yesanguan in Badong County and cost 720 million yuan.

It opened to traffic on November 15, 2009, and held the title of bridge with the highest span in the world until 2016, when the Beipangjiang Bridge, with a span of 564 m in height, was also opened in China. Interestingly, the Empire State Building could easily fit under this bridge.

Completed in 2004, the Langkawi Sky Bridge is the world’s longest curved bridge, 125 meters long and located on top of Machinchang Mountain. For the brave who dare to go through it, it shows spectacular and beautiful 360-degree views of the Andaman Sea. The bridge is less than two meters wide, and curves over the side of the mountain, suspended by a single pylon.

This is a short span of bridge, but crossing it can make your heart skip a beat. Located 3,777 meters high in the French Alps along the spectacular Mont Blanc massif, the terraces of Aiguille du Midi offer 360-degree views of the French, Swiss and Italian Alps.

If the thought of being on a terrace perched on the side of a mountain doesn’t scare you enough, you can always step into a glass cage that juts out from the cliff of the mountain.

Every year, approximately 250,000 travelers carefully traverse this delicate trail between the mainland and the eponymous bridge island. The Carrick-a-Rede Rope Bridge has been linking Carrick Island with the rest of County Antrim for over 250 years, located 30 meters above the ocean. It is 20 meters long and in the seventies, it had only one handrail and several wooden slats were missing. The reward for going through it? Enjoy the incredible panoramic views of the Isle of Rathin, Scotland and the Irish Sea, along with at least four species of native birds.

Considered by many to be the most dangerous bridge in the world, this rope and wood suspension structure is believed to have been severely damaged in a 2011 monsoon. However, if you are looking to cross Pakistan’s Borit Lake in the Upper Hunza and still find the walkway, be careful, and hold on tight: strong winds shake the bridge, and the constant plates are few and far between.

Suspended over 70 meters above the meandering Capilano River, this narrow passage stretches for 137 meters over fabulous views of evergreen forests. Technically, the bridge has been around since 1889, but its current incarnation goes beyond the original hemp rope and cedar plank construction, with seven additional suspension bridges and a cantilevered walkway.