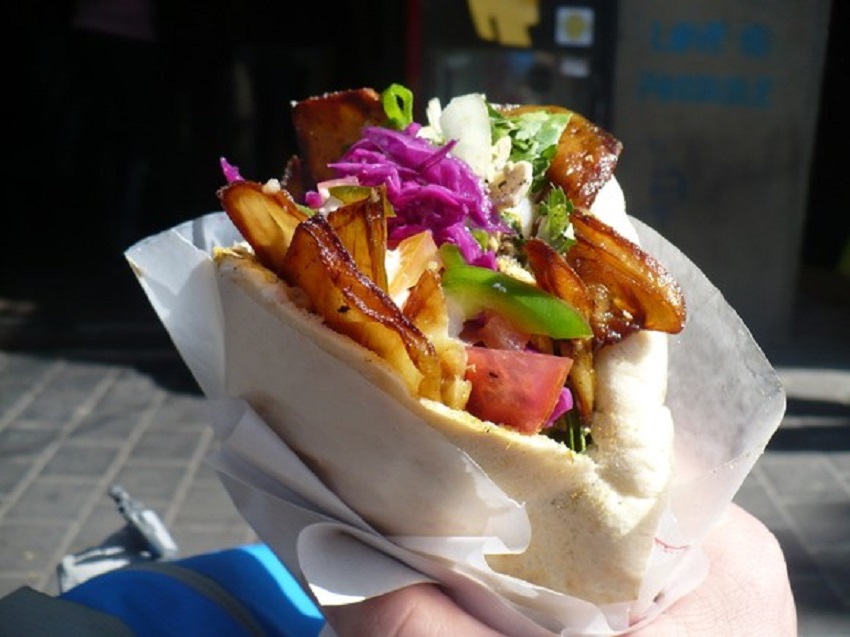 Sabich, an Israeli fast food with origins among Iraqi immigrants to Israel, is the most insanely delicious street food you probably haven’t discovered yet. A great introduction to the emergence of sabich as a popular fast food item in Israel, several years old now, can be found on Yael Zisling’s Gems in Israel site. According to Zisling, there was originally no name for this fast food among Iraqi Jews in Israel. It was simply the typical food eaten on Shabbat morning.

Residents of Tel Aviv are quite passionate about their sabich. I enlisted Israeli journalist and travel writer Yuval Ben-Ami for navigational assistance. A friend of Yuval’s had recently talked up the stand at 2 Tchernichovsky Street sufficiently to prompt him to switch his allegiance. The Tchernichovsky Street sabich takeout joint, called rather literally Sabich, was packed at lunchtime. Common to a number of other sabich stalls, its owner has a sense of humor. Yuval translated a sign on the wall clarifying that orders of sabich without eggplant would not be entertained.

Firmly in the high-quality budget eats camp at around 15 shekels (about $4.35) apiece, a sabich lunch is a real meal. The main ingredient is fried eggplant. There are variations, of course, but other components include tahini, hummus, crumbled hard-boiled egg, salad, pickled mango, hot sauce, and pickled cucumbers.

Sabich is a vegetarian. With the subtraction of the egg, it becomes fully vegan. Some enjoy sabich without the egg, while others love the egg for how it transforms in combination with the other flavors and gives the meal a real solidity.

It is easy to imagine sabich joining falafel and the burrito as a globally popular fast food. It’s just as easy to imagine the lack of quality and ingredient control that would come with mass adoption. For now, at least, this fast-food sandwich, quite difficult to find outside of Israel, has not yet achieved globalized status. This is a situation ripe for entrepreneurial action.