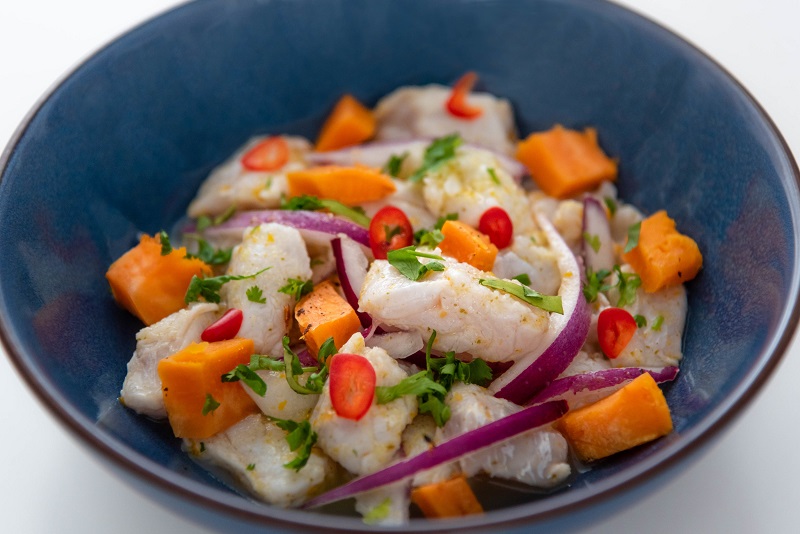 Ceviche is a Peruvian dish based on raw fish, lemon juice, and vegetables.

We discovered the recipe for traditional Peruvian ceviche.

Ceviche (sometimes seviche), is a dish of raw fish marinated in lemon juice, which long ago crossed the borders of his native Peru.

Today, there is no fashion event without your ceviche. And this flavor trend is certainly good news, because not only is it an easy dish to make, fresh and delicious, but also, ceviche is incredibly healthy and light. In this article, we explain its history and a recipe to prepare traditional Peruvian ceviche step by step. 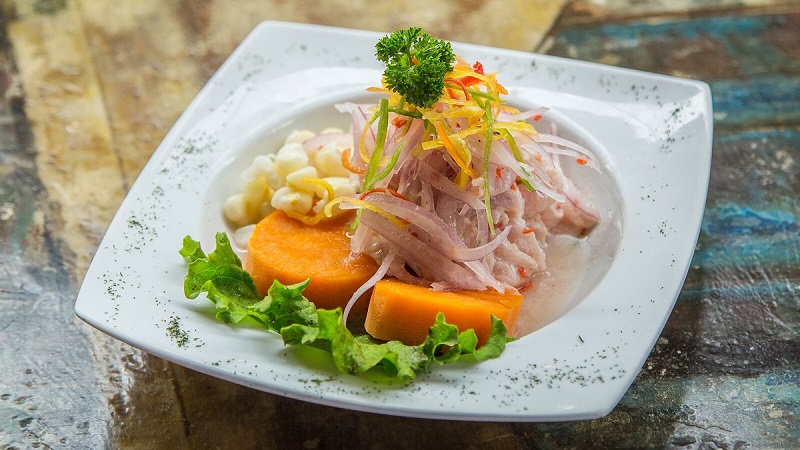 Ceviche is a traditional Peruvian fish dish that is eaten mainly on the coast, where fishing plays an essential role in people’s lives.

Las “Cevicherías” is the name given to fish restaurants where people from Lima stop to eat. For them, ceviche is what for us Europeans is probably bread. Indispensable, only much healthier. It is their national dish and their pride. The fish that lands on the cevicherías plates at noon surely was swimming the same morning in the Pacific Ocean.

Ceviche not only tastes good, but it’s also incredibly healthy. It is rich in protein and has also been shown to increase the energy of the body. There is even talk of its aphrodisiac properties: an affordable way to catch happiness and energy.

The last years have meant a culinary revolution, as it seems that Ceviche is conquering the entire world: in metropolises such as New York, London, Paris, and Berlin, there are already restaurants that only offer ceviche. Normally these restaurants have the same name as in Lima: “Cevicheria”.

What ingredients does the Peruvian ceviche recipe have?

Although there are different variations, there are a number of ingredients that cannot be missing in a traditional Peruvian ceviche recipe.

A very fresh raw fish is needed, preferably white meat: sea bream, cod, red mullet, halibut, mahi-mahi, bar, lean … We will avoid fatty fish such as mackerel, sardine, herring, which are too strong in flavor. Tuna is also not recommended. We must remove the dark parts, the bones and also the skin. Ceviche is only made with the perfect fish! Crustaceans such as prawns or scallops could also be used.

The fish is marinated in a mixture of lime juice, and this lemon juice is what will “cook” the raw meat. However, be careful not to prepare your ceviche too far in advance, as you should not overcook the lemon, it could disintegrate and lose its texture. Timing is key at this point. According to the most purists, the variety of the lime is important, but in Europe, the choice is very limited.

Finally, the third most important ingredient is pepper. It will get rid of the beans and use it especially to decorate the marinade. There are many options there. But be careful, a good ceviche should sting a little, but not ignite the palate.

4. And the key to cooking ceviche: the proportion

For a good flavor balance between the acidity of the lemon and the sweetness of the meat of the fish, it is calculated that for 500 g of fish, the necessary amount of juice is 15 cl (a small glass).

There are different variations when preparing the Peruvian ceviche. 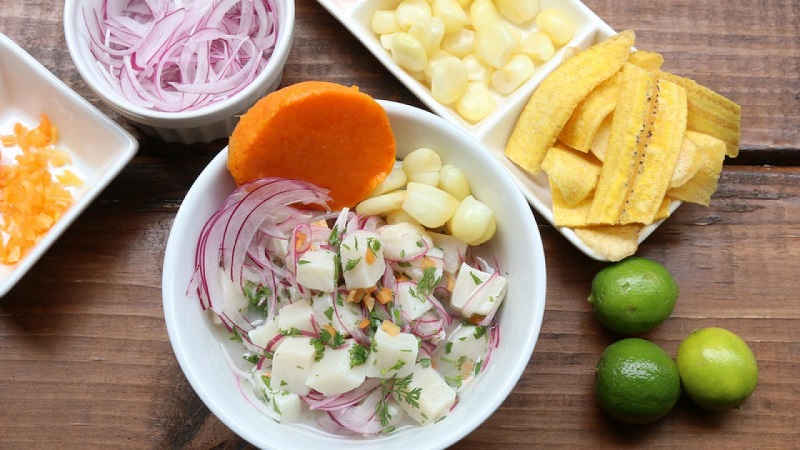 Peruvian ceviche is a fresh and easy dish to prepare if proportions are taken into account. Of course, the higher the quality of the ingredients, the tastier our ceviche will be.

Historians point out that the word ceviche is due to the arrival of the English sailors who, when trying it, called it Sea Beach (fish in the sea). According to documentary sources, the word ceviche has been found since 1820.

There are many different ways to write it, CEBICHE (according to the Royal Academy of the Spanish Language), SEVICHE, CEVICHE or SEBICHE … For this, there are other theories, such as the one suggested by the historian Dr. Javier Pulgar Vidal, who says that the name “Seviche” comes from the word “Viche”, from the “Chibcha” language. Used in northern South America and Central America, including northern Peru, its meaning is “tender” and should be understood as soft or fresh fish.

The history of ceviche is linked to the pre-Hispanic Peruvian history and is undoubtedly the result of a fusion of various cultures, woven over the years … It has its origins in the ancient cultures of the Peruvian coast that had fishing as a means of survival. The Chimes fished every day in the Pacific Ocean, in the boats built with rods. To satisfy their hunger, they ate fresh fish prey by adding salt. Later, when the Spanish arrived, eating lemon would make eating raw fish an established custom.

Another theory claims that the consumption of raw fish was due to a shortage of wood. The fish was seasoned with ají (indigenous pepper), bitter orange juice and lemons, with a final touch: seaweed.

Proud of Peruvian gastronomy, ceviche is identified as the quintessential Peruvian dish, because its flavor and ingredients reflect an identity: fish symbolizes the size of the seas; the lemon, the force of the blood; the onion, melancholy; the chili, malice; corn, the wealth of the land and the sweet potato, hospitality.